The site is secure.
The https:// ensures that you are connecting to the official website and that any information you provide is encrypted and transmitted securely.

This is a BETA site. It's an early, in-progress version of an improved ncd.gov. If you don't find what you're looking for, return to the main NCD.gov

Preserving Our Freedom: Ending Institutionalization of People with Disabilities During and After Disasters 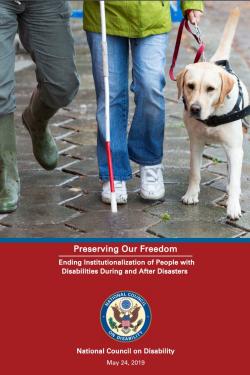 SUMMARY: NCD examined available data from several major storms and disasters and found that people with disabilities are frequently institutionalized during and after disasters due to conflicting federal guidance; a lack of equal access to emergency and disaster-related programs and services; and a lack of compliance with federal law.

The report, which focuses on the reasons people with disabilities experience involuntary institutionalization as a result of disasters, found that the Federal Government offers conflicting guidance on the topic.

The report also found that recipients of federal funds do not have training for how to comply with federal requirements to provide equal access to emergency and disaster-related programs and services when using federal dollars, nor do they have the cultural competence to interact with people with disabilities and often adhere to stereotypes and myths about disability that results in institutional placement. As a result of unnecessary institutionalizations during and after disasters, people with disabilities often go unaccounted for, families are separated from loved ones, working individuals with disabilities often become unemployed, and students with disabilities are often excluded from returning to school with their peers. The report concludes with recommendations for federal policymakers.

An official website of the National Council on Disability